It is often said that the only thing in life you can reliably count on is change.  I would add that you can always count on life being messy.  Both have continued to be true this week.  At the end of last week, I quickly made and finalized plans to attend the Women’s March in Washington.  Because many people have questioned the motives and mission behind the march, I decided to write a quick post each day as it approached.  So here’s my first disclaimer: this blog is a compilation (slightly edited) of those entries.  Second disclaimer: it is a bit longer than our usual Monday entry.  The good news is that you can read it in its entirety now or bit by bit.  I will say this: it got longer and more personal as the week went on and guided my prayers and meditations all week.  Finally, it is not a partisan statement but a position statement.  A passionate one at that.

#1. I march because women’s rights are HUMAN RIGHTS. Whether it is equal pay in this country or access to education elsewhere, we are equal.

#2.  My mother was born in the 1930’s and was a young wife and mother by age 20 in the 1950’s. She came from a humble background (at best) and did not have the resources to attend college. So she went to work then later was a stay-at-home mother. She wanted to go to medical school but instead occasionally volunteered in the hospital. By the time I was about 9 (sorry if I don’t have the details accurate, mom), she began a certificate program that allowed her to work in the operating room. Then she began to drive 60 miles in each direction to school to get her Associate’s degree in nursing. She later went back full time to get her BSN and graduated the same year I graduated from high school. It was never a question that I go to college and at 30, I went back for my PhD. It was never a question that I could not have that opportunity or accomplish that. I am marching for all of the women (my mother, my aunts, my grandmothers and all the others) who blazed that trail for me. I want to make sure that we, as women and other marginalized groups, do not lose these opportunities. #ThanksMom

#4: For my family in the LGBTQ community. Yes family–whether by birth, marriage, or choice (my “heart family”), you are valued and I have a voice about how you are treated in this world. Human rights are for ALL humans–NOT just the ones that someone randomly decides they like and agree with. Our constitution’s preamble says, “We the People of the United States, in Order to form a more perfect Union, establish Justice, insure domestic Tranquility, provide for the common defence, promote the general Welfare, and secure the Blessings of Liberty to ourselves and our Posterity…” Promote the general welfare. Secure the Blessing of Liberty. FOR ALL. Not just a select few.

Promote the general welfare. Secure the Blessing of Liberty. FOR ALL. Not just a select few.

SCOTUS has ruled on marriage equality dating all the way back to 1967 in the Loving v. Virginia case: Chief Justice Earl Warren’s opinion for the unanimous court held that: “Marriage is one of the “basic civil rights of man,” fundamental to our very existence and survival…. To deny this fundamental freedom on so unsupportable a basis as the racial classifications embodied in these statutes, classifications so directly subversive of the principle of equality at the heart of the Fourteenth Amendment, is surely to deprive all the State’s citizens of liberty without due process of law.” This was NOT popular opinion at the time but was a ruling based on Rule of Law and the Constitution. Get it right.

#5: For my brothers and sisters of color—more heart family. One of my brown-skinned brothers from NY is probably more like me than anyone else in the world—even more than my blood-brothers. I am grateful every day that our paths crossed through opportunity and that we were not separated before we had the chance to meet. And yet I worry about him: as kind as he is, he is still a large black man. As educated as he is, people make snap decisions based on his appearance. As compassionate as he is, an encounter with someone with a prejudiced or racist world view might turn out badly as they will miss seeing his huge heart. I worry about the young, eager, bright children of color that my daughter teaches and the doors that might be closed because of their color or lack of privilege.

Students of history also know that our country was built on the principle of not allowing religious persecution and religious beliefs to govern a nation. We need to continue to be diligent and keep challenging ourselves to make progress with our fellow American citizens regardless of where their families originated from; regardless of how many generations have resided here; regardless of their religious beliefs.

And if you identify as Christian, I dare you to show me the Biblical reference that says you are allowed to marginalize people who are different from you. That is not the Jesus I know.

#6: For people with “pre-existing conditions” and who have been turned down for health insurance by insurance companies. People like ME—by the way. If I were not fortunate enough to have a marketable skill that allowed me to be employed by a very large institution/company with healthcare benefits, I WOULD BE UNINSURABLE. 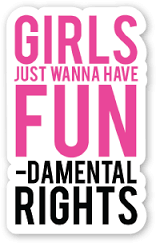 The state of health care in the US in 2005, was a primary motivation for leaving full time private practice and returning to work for the State. Because my husband and I were both self-employed, health insurance premiums had risen to a level that were unaffordable AND the “benefits” were hardly that; if I had waited 8 months, we would have lost everything because I had 2 surgeries and a diagnosis of ovarian cancer and was out of work for weeks and weeks. My “insurance” did not pay for doctors’ visits or diagnostic tests—some coverage, huh? FMLA allowed me to keep my job and have paid leave during my recovery. I am a grateful, happy, and loyal State employee to this day.

To return to the language of the Constitution’s preamble “We the People of the United States, in Order to form a more perfect Union, … promote the general Welfare” –which should include access to affordable healthcare. If not, you delude yourself that you don’t pay–in fact, you pay more with higher healthcare costs, higher premiums, and higher taxes. Get the facts.

I also believe that a woman’s healthcare decisions rest with her and her physician. Those decisions should not be made by faceless insurance companies charged with “containing costs” or be limited by a politician in Washington DC. It should not be a political issue anymore but rather an issue of reason, medical training, and compassion. Finally, offering unrestricted access to contraception decreases reliance on welfare, reduces the need for abortion, extends women’s educations, and allows women opportunities to be productive tax payers. This is, after all, 2017.

#7: For anyone who has ever been grabbed. Or assaulted. Or touched without their consent. Or bullied. Or treated with hatred or contempt. I have been. I am EVERY woman. Most may be surprised by this because only a handful of people know this story: 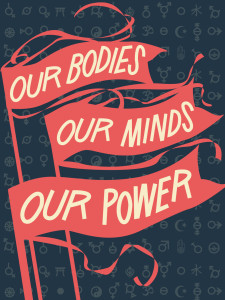 After Christmas and before the New Year in 1980, as a sophomore in college, I traveled to California for a national convention of a fine student organization of which I was an active member. There were several of us and on the plane we met fellow members from a rival state university. All of us were leaders and good students and of (supposedly) honorable character according to the governing principles of the organization. One afternoon in the convention center, one of these “fine young men” from the other school asked me to step aside into a hallway off of the main concourse. It was mid-afternoon with plenty of people walking by. And yet, he decided it was OK to push me up against the wall, try to kiss me, and ripped my blouse wide open. I don’t remember much, but I do recall slapping his face in anger. Now, keep in mind, this was “the good old days” back when “America was great” and, following the lead of their President, Mr. Reagan, people conducted themselves with more decorum. I hate to think what WOULD have happened had I been drinking at a party in one of the hotel rooms when he decided that he had access to my body without my permission. Or if the role model du jour had not been so gracious.

Did I tell anyone? No. Except my best friend who was with me on the trip. I was a nice girl and didn’t want anyone to think badly of me. Yep. There it is: Taking responsibility for something I didn’t do. Fearful of being blamed. Covering up and protecting someone who was wrong. I can’t remember his name (probably a good thing) but I’ve never forgotten his face. And I know people who might remember who he is. I just hope he was blessed with 5 daughters. I’d love to talk with him today.

Am I traumatized? No. Am I a victim? No. Did I whine about it? No. Am I “too sensitive” because of this incident? No.

Does it inform my experience? Absolutely. Do women wait a long time to reveal these offenses? Yes. Sometimes 36 years. 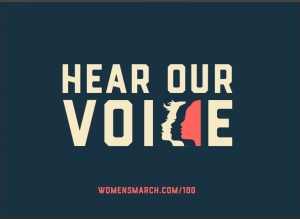 Because I Refuse To Go Back in Time.

This is why I marched: Because Life is Messy every day and I want to make the world a better place and Life More Marvelous for more people.